And A Few More Pictures For Good Measure

Ah, what the heck. Here are a few other pictures from the summer. 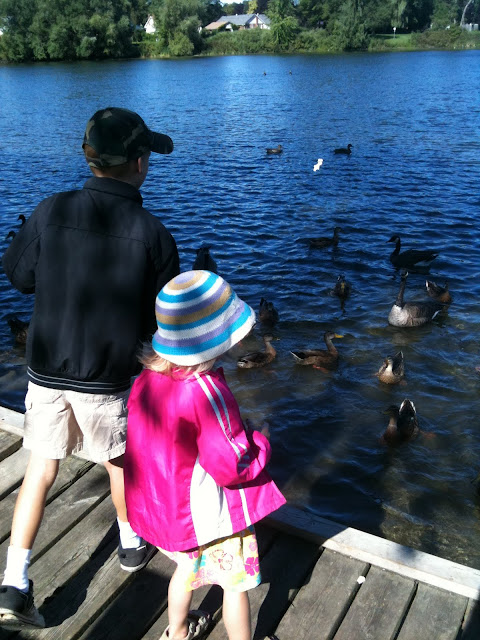 Feeding the duckies at the park 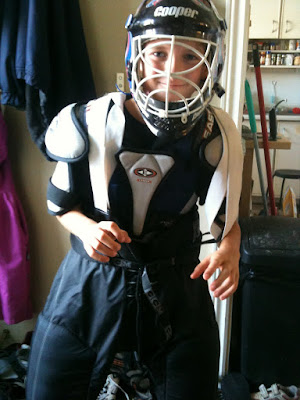 Garrett & I found this hockey equipment outside and it fits (mostly). 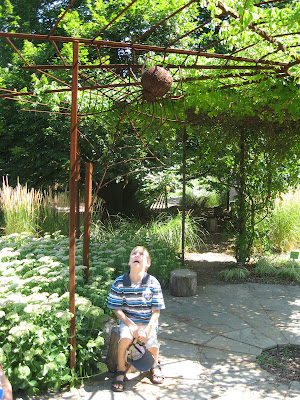 We went to the Royal Botanical Gardens and Garrett sat on a tuffet... 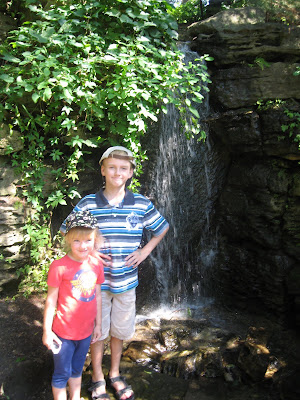 The Rock Garden at the RBG is awesome. This waterfall was rather pretty. 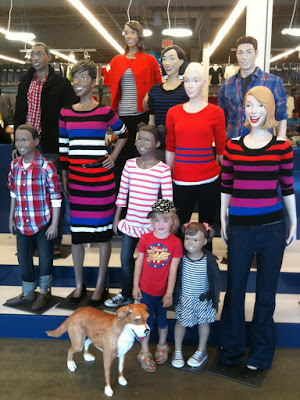 Can YOU find Kara in this picture? 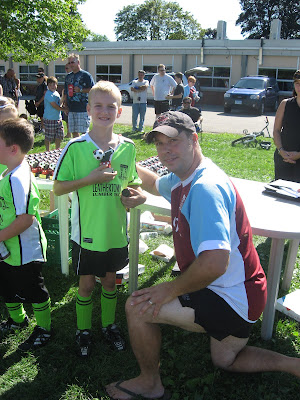 Soccer season ended with a great day of fun and trophies and pizza.

And last but not least, a few pictures from the first week or school. 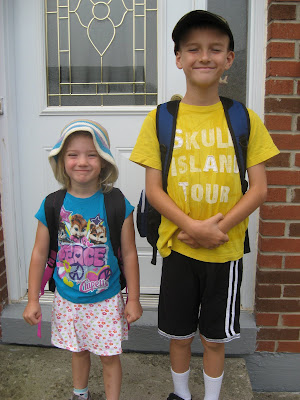 It has been a little while since I last posted pictures of the kids, so get ready for a deluge o' pics!

We went to Niagara Falls this summer and the kids got up to some trouble. They're making a run for the border on their purloined wheels... 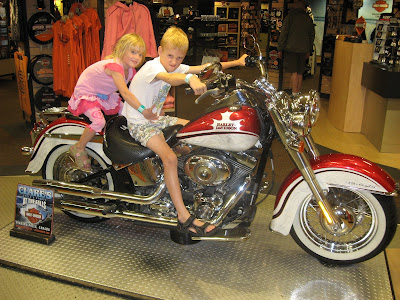 Unfortunately, they ate a bit too much on the way and got stuck in Canada. 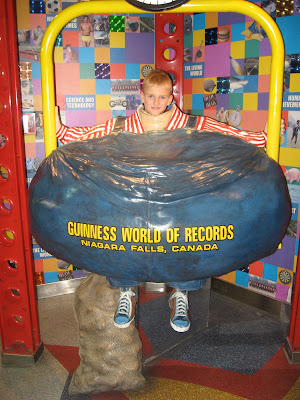 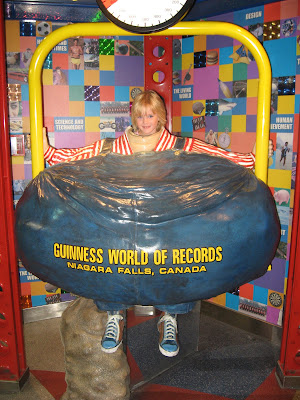 They went on a radical diet and now Garrett works for the law, not against it. Kara has gone vegetarian and just eats bark and leaves now. 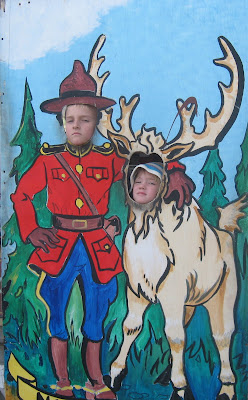 And lastly, here's a picture of Kara from atop the Tower Of Terror (as I call it) aka The Pink Panther Lazy Balloon Ride (as everyone else calls it). 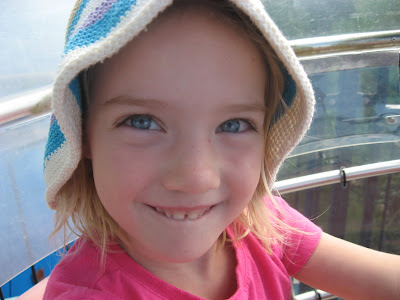 'Twas The Last Day Of Vacation...

Well, today was an interesting end to the kids' summer vacation. It was kind of nice for Julie & I. Both of the kids spent almost the entire day (9-5ish) outside playing with their friends in this insanely chilly weather and that gave us an chance to just relax inside and veg for the day.

How lazy was it? Well, I beat a game during the afternoon and then sat down to watch the extended cut of The Blues Brothers. And to top it all off, we were able to watch the first chunk of Empire Strikes Back (woo Hoth!) before the kids went to bed. Heck, Garrett was so tired that he didn't even want a story or anything. He just got up, shuffled over to his room at 7:30 and climbed up into his bed on his own volition.

Tomorrow is his first day of school and he's pretty excited. He had a bit of an emotional breakdown after supper when I tried to convince him to let his caterpillar, Sunshine, go free. We reached a compromise where we'd leave the container open on the backyard table and it would be up to Sunshine to stay or go. But other than that, Garrett's pretty excited to have a new class and make new friends.

Kara doesn't start school offically until next week, so that gives me a chance to see her off on the bus for her first day of school proper. She is going for an orientation day this week though but Julie's got that covered.

And now I'm off to get in my last burst of gaming for a bit before I'm off to the cottage to fish, read and play lots of board games for the next few days.
Posted by Brock at 10:37:00 p.m. No comments:

I Eats Me Spinach!

Stay off the lakes, because I just passed my boating safety certification test!

I'm heading up north tomorrow for a 4 day cottage trip for work and part of the preparation for that trip was to try to get my boating license. I still haven't received the e-mail with the copy of the license yet, but hopefully I'll have it in the morning so I can take it up with me.

On the one hand, I'm happy to have the license now as it means I can actually take boats out on the water and not have to worry about a piece of paper.

The downside is that one of the guys I'm taking up on this trip will probably shanghai me and I'll be forced to spend a day or two in a boat while he fishes. I won't lie and say that the idea of failing the test right now didn't cross my mind...

But at least now the option of taking a boat out for a day is there and that's cool.
Posted by Brock at 10:33:00 p.m. No comments:

While I didn't forget his birthday the other day, I DID forget to put my usual post about his birthday on the site. So happy belated birthday, Dave.

It seems that everyone else around me has had a birthday recently too. So happy birthday to all y'all.

Well, thanks, Mr. Lucas, for costing your empire $100 from my pocket. I've been cautiously optimistic about the upcoming Blu-Ray release of the Star Wars saga but knew it was too much to hope that Lucas wouldn't mess things up in the original trilogy, AGAIN. A few of the effect tweaks aren't horrendous but he's gone in and changed some of the audio in ways that are just dumb.

How dumb? Let's just say that this clip:


is actually preferable to the changes he made to the film. If nothing else, it's funny! I can only assume that Lucas is the ultimate troll with the way he refuses to release a proper, untampered version of the original 3 movies. That, or he requires internet rage and nerd tears to sustain him.

Next week I'll be heading up to Trout Lake for our annual vacation with work. It's going to be a small crew this year but it'll be fun. I'm in the midst of getting my boating safety license and if I can sink the required time into it today to finish it, I might be able to take a boat out on the lake this year for some fishing.

My only worry is that I'll end up breaking things like I did the two propellers that I smashed last year on our houseboat trip. Sigh. But an outboard motor on a little fishing boat is a little easier to maneuver than a giant houseboat, so I should manage to avoid destroying any boats this year. I hope.

If nothing else, it looks like it'll be a nice week next week and I'm also planning to take up my boardgames, so much Talisman and Ticket To Ride will be played, I'm sure.
Posted by Brock at 8:18:00 a.m. No comments:

So today marks the end of my first week working at the new house. It has been a pretty seamless transition, though I'm still experiencing some cognitive dissonance when I go to look for something and it's not where I would normally find it or when I run into a slightly different method of doing things than what I'm used to at the house I've worked at for the past 6 years.

That being said, I think that now that I've had a week to acclimate to the pace and the people at the new house, I'll probably enjoy my stay here much more than I expected to. The people here are much older than the crew I usually support so the energy level is a lot more subdued. I can actually get some work done during the day now instead of being interrupted every 5 minutes with a new question! Yay! The upside of that is that if I can actually get my work done when I have a chance to, I can spend more time out with the guys doing things instead of being cooped up in the office on a never-ending treadmill of paperwork. Huzzah!

So things are going to be ok, I think. I wasn't a huge fan of this transition when it was asked of me a month ago but I know the people here and I know I'm going back to 'my house' early next year, so I think things are going to be pretty swell in the interim. And the change of pace is nice. I get to look out over the escarpment every morning on my way down here which is a little nicer view than downtown Acton :)
---
What I'm Reading: Ready Player One
What I'm Playing: Deus Ex: Human Revolution, Deathspank: Thongs Of Virtue
What I'm Watching: Community: Season 1
Posted by Brock at 8:15:00 a.m. No comments: