In case you haven't heard, Garrett & I are on something of a Wrestlemania kick. I tend to watch on occasion at work and I've been going to a few pay per view events with work over the last year or so. Sometime late last year, I stumble across the recap shows for the Raw & Smackdown shows and every few weekends, Garrett & I (and sometimes Kara) would watch the sweaty dudes in tights throw each other around the ring.

Well, Garrett is a full blown addict now. I took him to a pay-per-view back around Family Day and he has been hooked since. He now has wrestler toys, signed posters and we DVR the show every week. This has all been in anticipation of tomorrow night, Wrestlemania 28, and all of the fun that entails. He's got his picks of each of the main matches already locked in and has been debating the merits of the wrestlers for weeks.

I'm looking forward to it because, well, it's always a good show. But even moreso this year because half of the fun is going to be watching Garrett's reaction to things. We'll be watching it at the movie theatre which is always fun because of all of the crowd reaction. I may not be big into sports, but FAKE sports is my cup of tea. 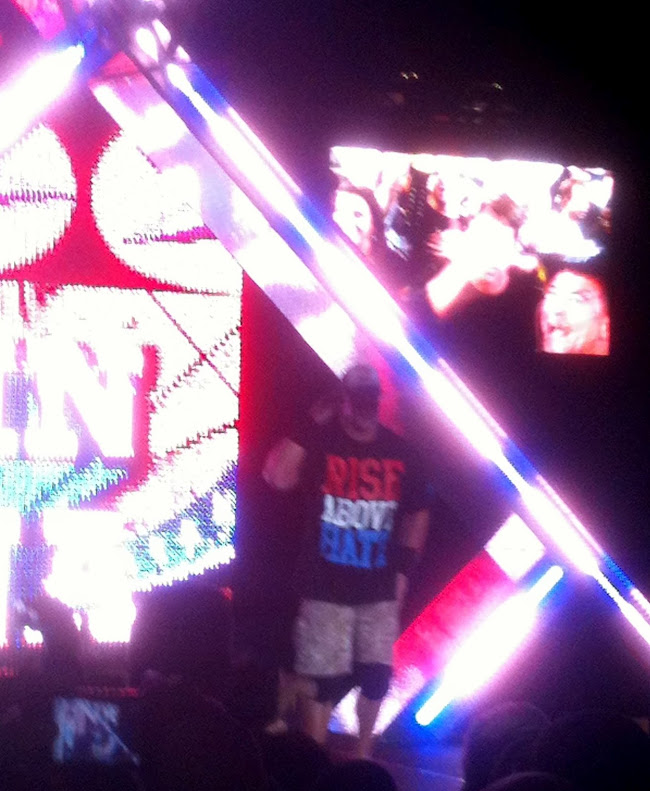 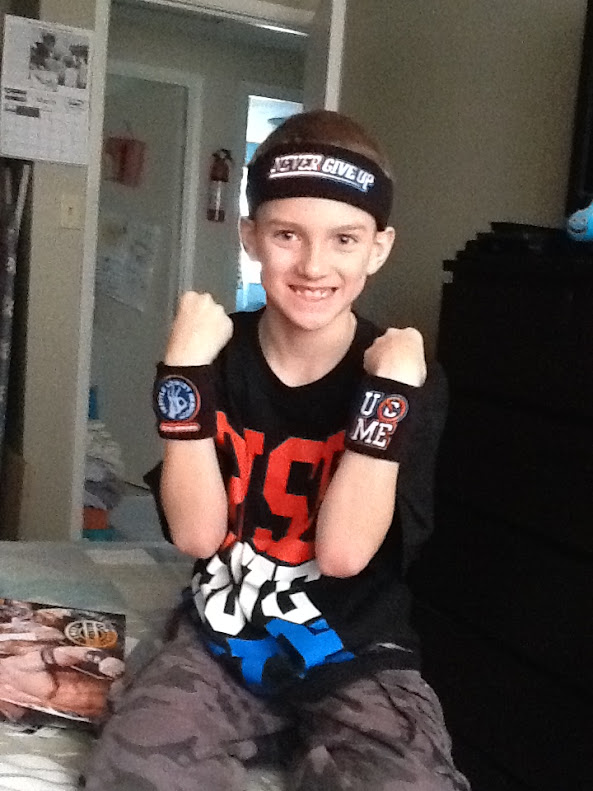 So today was a busy day. I was supposed to be spending at least a portion of this weekend tromping around in the woods with my former manager and a few coworkers doing some LARPing (Live Action Role Playing, for those scratching their heads).

Instead I spent the day hunched over my tub, inhaling fumes and fighting a horrific slime monster known as 9 year old mildewed caulking. Blech.

I think I'm more tired than if I spent the weekend in the woods.

The upside is that I've not only sealed the horror that is my bathtub and made it look like something you can comfortably invite strangers over to use, but I've also overcome my fear of caulk. I was responsible for the atrocity that was our bathtub because everything just glooped up when I tried to put it on and I had no idea what to do. This time, I got advice, spent time cleaning the area properly and had the right tools.

I'm not saying I'm going to quit my day job and spend the next 30 years going to sealant conventions, but it was nice to see that I could actually do this incredibly simple task and not mess it all up :)
Posted by Brock at 9:08:00 p.m. No comments:

What Is That Smell!?

We went to look at a house that's for sale right next to our friends. I was kind of intrigued as the owners had built in two massive fish tanks into a wall in the basement and while that seems to be a turn-off to a lot of prospective buyers, I was in love with it.

Unfortunately, the first thing the realtor said when we walked in was, "The place needs a bit of work." I'll say this. It made us feel a LOT better about the state of disarray our house was in. If this is what people who are trying to sell a house are willing to leave their house like, we're golden when it comes to selling ours.

And it stunk. Oh, lord, did it stink. It was like a wet dog rolled around in cat piss and was hiding in every room of the house. They have a cat but I've never smelled a house reek that badly and I've grown up with cats. I think the fact that they didn't even bother to light a smelly candle or febreeze the place made it worse. It's like they weren't even trying.

The fishtanks were filthy too. Lovely big fish and the tanks were pretty cool, but they were also coated in algae and slime. You'd think they'd maintain them better.

We're not planning to move anytime soon, so this was more of an excursion to see what houses were like and also to get an idea about how much work we'll need to put into ours to get it showroom ready. Of course, now Julie has the home shopping bug, so we'll see how soon I'll need to recruit some friends to help us move :)
Posted by Brock at 9:37:00 p.m. No comments:

That being said, Garrett almost didn't survive this next bit of drama.

He isn't at the park. He isn't hiding in the bushes where the kids usually play. He's not behind the houses by the park. He hasn't come home a different way while I was out looking for him. He's not anywhere that I can see where he would normally play. I'm starting to get a little panicked at this point, esp. since his other friend isn't answering the door.

Just as I'm about to get REALLY worried, he comes sauntering across the parking lot from parts unknown, looking all innocent and saying, "Hi daddy!"

"GET HOME... NOW!" is my only response. As we're just about to round the side of the house into our front parking lot, I point at the three cop cars parked in front of our house and say, "We were so worried about you that we had the police here to help us find you."

He scurried into the house, hanging his head in shame, knowing that he was in big trouble. I, on the other hand, nodded to the officers, who were actually just parking in the empty spots in front of my house while they took care of something a few houses down. They smiled back because they knew I'd just pulled one over on him.

Suffice it to say, Garrett now knows that it is VERY important to let us know where he is at all times OR ELSE THE AUTHORITIES WILL BE CONTACTED!

Oh, and I also found a toy that he really wanted on sale in a clearance bin this evening while I was out. I have stashed it in his room in such a place that he'll only find it if he actually does a proper job of cleaning his room. I'm not going to say anything about it except to remind him that his room is pretty messy.

We're two days done of March Break and I'm pooped. At least I don't have anything too crazy planned for the rest of the week.

Yesterday the whole family went down to Toronto to visit the CN Tower and wander aimlessly for a while. Kara was super excited as it was her first subway ride and first time up the tower, while Garrett was the grizzled veteran who compared everything to the good ol' days of last year when he got to go with his cousin instead of his stinky sister.

But a good time was had by all and we managed not to plunge to our deaths when we stepped out onto the glass floor a few times.

We also visited the Eaton's Center which has both changed completely and stayed almost exactly the same since I was there last. All I can say about TEC and Yorkdale Mall is that there are FAAAAR too many clothing stores and not nearly enough toy and game stores. Sigh.

Today was a bit more relaxed, though not without some drama. After walking up to the garage to get my car (it was getting tested for Drive Clean), we drove down to the Canadian Warplane Heritage Museum in Hamilton. Of course, we had to stop at Pickard's Peanuts on the way (yum) and then we wandered around the hanger for a couple of hours before heading home.

The kids were hurting themselves a bunch today though. Garrett managed to slice his finger on one of the cockpits and also whacked himself in the mouth with a flight control stick in the simulator (don't ask me how he managed to do that). Kara somehow got bashed in the face when they were outside playing 'Fighter Planes' on the runway in front of the museum. Sigh. But both survived.

Tomorrow we're going to build Lego for the library Lego contest and maybe go watch a movie in the afternoon. I'm going to try to rest my aching ankles for a bit!
Posted by Brock at 11:07:00 p.m. No comments: